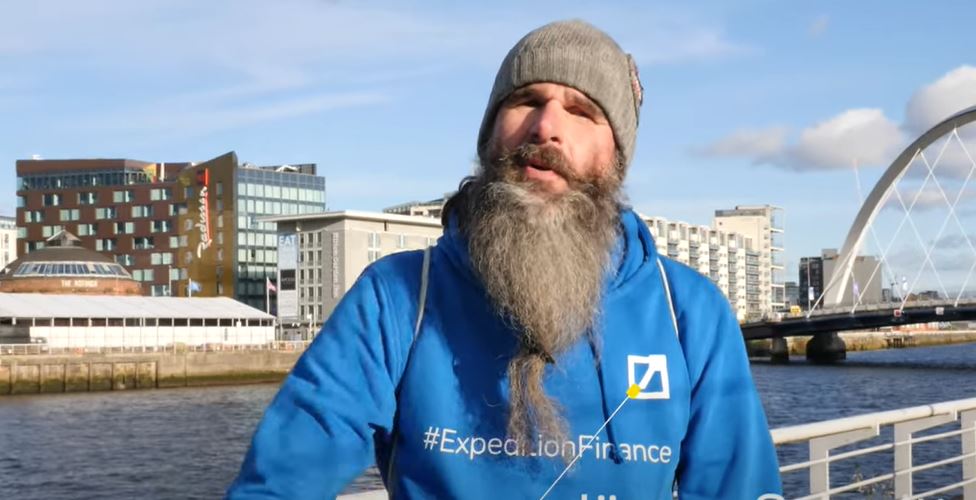 If you're a bank or financial services firm in 2022, it's not enough simply to generate returns for shareholders and keep staff happy at bonus time. You also need to conduct cultural outreach to pump the brand. Hence, Goldman Sachs has 'Talks at Goldman Sachs' to help people get to know the people behind the firm; Morgan Stanley has 'ideas podcasts' questioning things like why we work. And Deutsche Bank has a bearded explorer.

Deutsche Bank's guy is called Jürgen Schmitt. He's German and has worked for DB for nearly three decades after joining as an apprentice in 1993. He describes himself as "on an expedition", and he looks the part. - With a greying beard down to his midriff, Schmitt looks like he might be more at home in the Antarctic than a trading floor, but the trading floor is where Schmitt spent most of his career.

"I have had this beard for a very, very long time," says Schmitt. "A lot of people at Deutsche Bank know me and have worked with me over the years. For most of my career I was an equity derivatives trader in Frankfurt."

Until 2018, Schmitt worked on Deutsche's Frankfurt Delta One trading desk. But four years ago, the bank made the decision to relocate the desk to London and Schmitt's role disappeared. "I was given some time to think about what I wanted to do next," he says. "It was an opportunity to reflect upon whether I wanted to do something similar internally, to move into a different internal role, or to find a job elsewhere."

Schmitt was informed that his role was being restructured in June, a few weeks before he was due to go on holiday. It was during his holiday that Schmitt had an epiphany. "I went on holiday and during my holiday I had an idea. I came back, and I presented it to the communications team."

Schmitt's idea was effectively for an "expedition" in which someone would make short weekly videos on financial topics of interest to people inside and outside Deutsche Bank. It's ended up being a one-man show featuring himself. "It's always a film of three to four minutes or less," he says. "It's about sharing knowledge and engaging the community." The shows are called 'Expedition Finance' and so far Schmitt has made over 50 of them.

Schmitt's approach is a lot less corporate than the 'thought leadership' efforts of rivals like Goldman. For one, there's the beard. There's also the low-budget approach to production (Schmitt works with one external filmmaker but does everything else himself), and the willingness to tackle difficult topics and include dissenting opinions. In one video, Schmitt goes to Glasgow during COP 26 and unearths another bearded Deutsche Bank employee who hasn't visited an actual Deutsche Bank office for six years. Schmitt films some environmental protestors spreading fake blood on the street next to them and asks his new remote colleague what he thinks. "I think it's a worthwhile thing. I think the protests make a lot of good points," the colleague responds.

Schmitt's favourite video (shown below) involves him visiting a Deutsche Bank colleague in Brilon, Central Germany, who now visits his clients at home since the local branch was closed. Together, the two visit the old DB office. "People used to come to you, now you're sitting in people's living rooms," reflects Schmitt, who says the film was an emotional one to make.

Schmitt is adamant that his videos aren't marketing vehicles for Deutsche Bank. "It's about the topic, and presenting a view from the banking industry," he says. "After a long time as a trader, I am having a lot of fun doing something totally different."

Other markets professionals could draw inspiration from Deutsche's bearded explorer. "Hopefully, I can be a role model. There are things you can do beyond the job you know, and you can gain ideas from other teams," Schmitt says. "I'm not a journalist, and I learned a lot from the Deutsche communication team. The communication team were also able to learn about markets from me."

"I'm asked a lot about resilience. It helps to look forward and not back - you can find something else to do if you really want to. It just takes a bit of inspiration."